Recently The Signals Branch, Ray Pilgrim, delivered six of the eight signals required for controlling operations at Borenore. The remaining two, the Distant Signals, will arrive in due course. These models are exquisite, all custom made as the prototype signals at Borenore were somewhat unique.

Borenore Crossing Loop Signals, 3 for each end of the loop.

We had only a few photos to reference as Borenore loop was extended and colour lights installed just before my return to the sight in circa 1974. Thanks to the couple of photographers who published those photos that allowed us to peer into the past. There were a couple of photographers who included things like signals and infrastructure in their formatting, maybe by accident but they were a big help. You can now revisit the signal diagram in an earlier post to see how they fit into the scene. I always say if you have photos or other stuff of Borenore, I would love to hear from you.

The arrival of the signals forced me to revisit how I will fit them to the layout and for a while I questioned my use of extruded foam until I came up with method of “drilling” a 22 mm hole through the foam. Well I could not drill a hole successfully but I think I have solved the problem by using a wad punch, not as a punch but as a reamer to cut out the plug of foam. Thanks to Rod Kelly for acting as a sounding board.

Thanks again for viewing. Cheers Phil

at August 12, 2022
Email ThisBlogThis!Share to TwitterShare to FacebookShare to Pinterest

The Storage System on the Home Version I probably should have posted this article earlier. On my former layout at the previous home, I b... 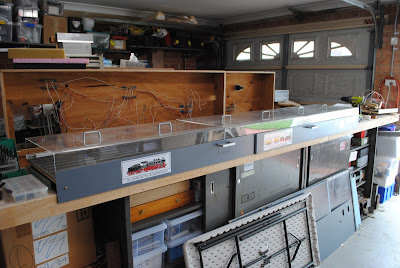